‘Pegasus Racing’ made this regatta their own by winning the two final races of the series yesterday afternoon (Friday). The emphatic nature of their victory was all the more remarkable for the fact that they won five of the ten races in the series. Howie and Mike, from southern California, have won the world title on two occasions, while their forward hand Trent hails from Sydney and is the son of Trevor Barnabas who won the worlds on no less than five occasions before he retired from Skiff racing last year. At the prizegiving yesterday evening, Howie paid tribute to his regular crew Mike, and thanked Trent who he said was the strongest person he has ever sailed with. 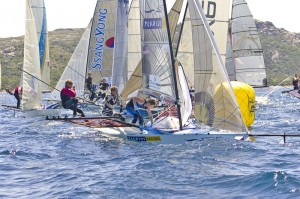 Races 9 and 10 were sailed in light breezes, and were won in fine style by the ‘Pegasus Racing’ team. The final race brought a surprise for seven boats that were disqualified for being over the line at the start, perhaps a record number for this class.

The fleet of 20 Skiffs, from nine countries, enjoyed an outstanding regatta in the most beautiful setting of the Golfo della Saline, hosted by the VelamareSkiff sailing school, which is part of the Metauro Mare group.

This regatta was part of a three-event international series, the first of which took place earlier in the year, with the final one scheduled to be sailed in San Francisco in September. This event was also one of the Euro Grand Prix series, which began at Carnac in France last month.