SANTA CRUZ, CA–(Marketwire – May 7, 2013) – As the Apple® App Store approaches 50 billion downloads, Fullpower® is proud to share that MotionX®-GPS Drive was just announced as one of the Top 25 All-Time Paid Apps for iPhone®. 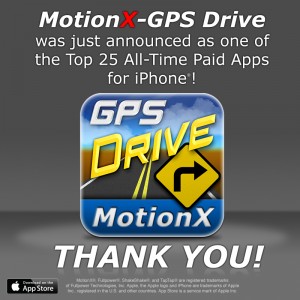