“Wearable and IoT depend on sensor-fusion to deliver,” said Philippe Kahn, founder and CEO of Fullpower. “Jawbone UP and Nike+ Running, for example, are showcase implementations and this is just the beginning.”

The patent for invention number 8,784,309 relates to monitoring human activity, and more particularly to accurately calculating user activity statistics using a location sensor and an inertial sensor. This patent supplements the Fullpower patent portfolio for the MotionX® Sensor-Fusion processor technology, which includes US Patents 8,568,310, 8,187,182, 7,647,195, 7,970,586, and 8,320,578 among others.

The Fullpower Patent Portfolio
These patents are part of an intellectual property portfolio from Fullpower that includes more than 45 issued patents with dozens of patents pending. Broad coverage for the MotionX® Technology Platform and Sleeptracker® technology introduces a new and necessary approach for continuous activity and sleep monitoring and analysis, with applications spanning a variety of health and fitness, medical, and navigation applications. Fullpower’s ongoing innovation translates into continually broadening and deepening of this patent portfolio. 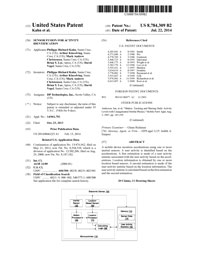