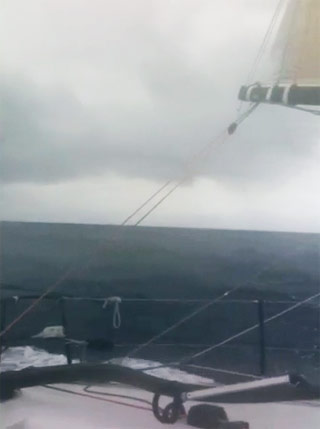 Today we are living within the realm of Squalls. Squalls in the the Northeast sub-tropical Pacific are a bit different. They are small, concentrated and powerful. The rain lasts about 20 minutes under them if you’re stationary. We’re not.

I love squalls in Honolulu: refreshing, cleansing and replenishing for island precious water.

On Pegasus 50, we move fast at more than half of the squall’s speed. My personal interpretation of North East Pacific Squalls is that they are caused by evaporation with subsequent cooling of the rising air and travel with the tradewinds. During their build-up phase, they mostly “suck” air into them as they are highly active building convective systems. The upper limit comes when the ultra moist air reaches adiabatic balance. Therefore, if you are in front of such a building squall, you loose a lot of wind velocity and get a nasty right shift, but if you have one behind you, she “sucks air” that heads you if you are on starboard jibe with a great boost in velocity. The longer you ride that squall the better. Mark caught a short video of one that he was riding to a max speed of 28 knots of wind and 22 knots of boat speed this afternoon . Check it out, passing right behind Pegasus 50. Mark is steering and filming with his MotionX iPhone 3GS in one hand.

As the the evening cools, squalls get morphed into the opposite. The building convective energy gets pulled from under the squall around midnight, and then all these squalls start collapsing as major angry “puffers”. It takes 12 to 18 hours to build a squall and they colapse in about 4 hours. These are efficient entropic thermodynamic systems, so a lot of concentrated energy dissipates very rapidly. Colapsing squalls will have winds of up to 45 knots in the front of them. That’s serious business. Tonight’s night watch could be interesting, but one thing at a time.

We are in an area of clear now, chewing the miles. Life is good aboard the mighty Pegasus. Dinner time soon!