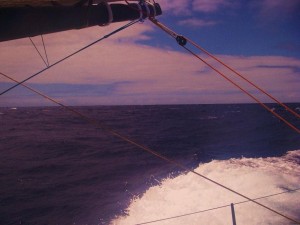 Transpacific races like Pacific Cup are all about squalls and cloud management: This picture taken during a lull at 4 PM, you can see the squalls starting to form.

By now we are totally desensitized. Thirty knot puffs, bring it on! 25 knots of boat-speed, while taking a bite out of an apple. 3 days ago we would have been terrorized and shaking in our boots. Yes if we crash, that Navy Blackhawk chopper better come and get us because there won’t be much of anything left. We checked the life-raft and the grab-bag, it’s there ready to go. We’re racing Adrienne and Dave for a one-dollar bet and the record. As of this morning we have a shot at both. But until tomorrow morning, we won’t know if our Karver lock failure and the couple of hours we lost didn’t do us in for both the dollar (very important) and the record (they come and go – we held the fully crewed one for a decade from 1986 to 1996).

Night is coming and the squalls are towering. Many people think that this race is about GRIBs, routers, electronics, weather maps, quikSCAT charts, and technology. I think that these Transpacific races are won or lost with good old fashioned navigation skills. It’s all about clouds and squalls. The GRIBs and weather maps can’t help with them. The last third of this race is like a dinghy race downwind to the leeward mark with lots of squalls throwing you curve balls, or giving you an opportunity to ride them for hours on end. I learned that from Mark Rudiger. Rudi would get on the boat and bring all his notes from his prior crossings. When we’d get to the squalls, he’d study at the nav station, then get on deck and ask questions to the crew. What’s the bearing of this one? How about that one? How high is it already at 8 PM? Wow that’s going to be a killer around 3 am when it collapses after the air has cooled and the sea surface temperature has remained fairly constant. Rudi was the master. And in looking at all those squalls as the sun sinks into the West Pacific like a ball of fire we both get pretty quiet and introspective.

We’re settling down for the night. It’s going to be a windy dark night with the moon at our longitude not rising until 1 am. With the thick squall cover we won’t see much of it. We’re tying everything down, cleaning everything and going through all of our contingency plans. A big part of the race lies in the night ahead.