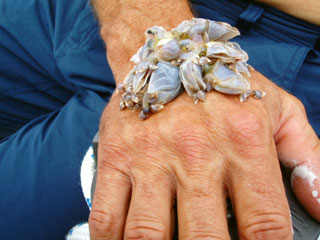 Garbage-in, Barnacle-out: Sea-life is eager for whatever support, including plastic, glass, nets, you name it. Here barnacles are growing on a piece of yellow plastic, washed-up on deck during the night. (Background hand, courtesy of Zan-Da-Man)

PYEWACKET’S DAY OF RECKONING IN THE WIND GAME

LOS ANGELES—Pegasus 77 sailed farther and faster Tuesday but Pyewacket
stretched its lead in the marquee match race of the 42nd Transpacific Yacht
Race to Hawaii, a situation that has often been an anomaly of the race for
the last half-century.

Meanwhile, Renegade, an Andrews 70 sailed by Dan Sinclair of Vancouver,
B.C., dropped out Monday afternoon with a problem described as “failure of
the boat’s steering sheaves.” Renegade started in Division 2 a day earlier
and was 260 miles offshore in Mexican waters. Sinclair, sailing his fourth
Transpac, said the breakdown occurred in 12-foot seas. He said the boat was
in no danger and was returning to San Diego but gave no ETA.

There have been three dropouts since the starts, reducing the fleet to 54
boats. Beau Geste, a Transpac 52 sailed by Hong Kong businessman Karl Kwok
with a largely New Zealand crew, now leads Division 2 boat for boat and on
corrected handicap time, second only to Pyewacket in the latter.

Until 1947, logic called for sailing a direct, or “rhumb,” line of 2,225
nautical miles from Los Angeles to Honolulu because sailors didn’t realize
they could avoid a region of light wind by sailing a little farther south.

With improved weather information developed in World War II, two
boats—Chubasco and Westward—tried just that in ’47 and finished first
and third. Then in ’49, when Westward’s navigator, Bob Allan, pulled the
same ploy that delivered the first Barn Door trophy to Richard Rheem’s
Morning Star as first boat to finish, the others were sold on the concept of
the Pacific High—that monstrous, undulating zone of high pressure waddling
over the eastern Pacific Ocean.

Avoiding the high remains conventional wisdom in the 42nd Transpac 54 years
later, but it’s a like a boxing opponent, bobbing and weaving and leaving
everyone on every boat to look to the navigator for guidance. And where does
the navigator look? Often to Nashua, New Hampshire, where George Caras of
Commanders Weather is based.

Studying the positions reported at Tuesday morning’s daily roll call, Caras
said, “North may be favored a little bit [Monday] or [Tuesday], but south
will be favored starting [Thursday]. The goal for a lot of the boats is
going to be to get farther south.”

Those would include Pyewacket, Roy E. Disney’s Reichel/Pugh 75 that holds
the race record of about 7 1/2 days. Sailing a more direct course, Pyewacket
logged 329 miles at 13.7 knots in the first full day at sea and moved into
first place in corrected handicap time for the entire fleet.

“[Pyewacket] got a little lead because they found a shade more breeze up
north,” Caras said, “but they’ll come down now to keep up with the wind.
Their wind angle may not be as good coming down and it could tighten the gap
or give Pegasus a little bit of an advantage, but we’ll have to see on
that.”

There also is good news and bad news for everybody, Caras said.

“The high [pressure area] is moving away from the fleet farther out. That’s
going to allow that low to come east-southeast, and that essentially will
weaken the trade winds. High pressure drives the belt of the trades, but
it’ll be so high up that it’ll have less influence.”

That could dampen hopes of a record. The frontrunner, Roger and Brenda
Kuske’s Lady Bleu II, a Dynamique 62 from San Diego that started with the
Aloha class a week earlier, was 884 miles from the finish but sailing into
weaker wind above the rhumb line.

“Their smarter move would be to come a little farther south,” Caras said.

“The winds were as light as I can remember seeing them in the middle of the
Pacific,” she said. “We got down to 5 knots of wind . . . just trying to
keep the [spinnaker] filled as we slopped along. We’re supposed to be in
15-knot trades.”