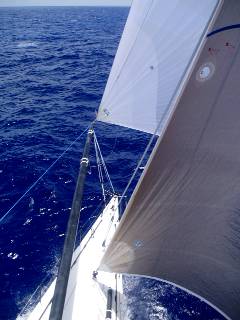 The trades have picked up again, beautiful sailing with the 4A spinnaker flying and the staysail

It’s beautiful sailing here: The trades are back up to 16-18 knots. We’ve got our 4A spinnaker up with a staysail. This is just what the brochure advertised and why California to Honolulu passages are probably some of the best offshore sailing in the world. This is my sixth trans-Pacific crossing and I’m hooked. Young Shark is just 13 and this is his third, he just loves it. The first couple of days tend to be cold, wet and wild and then the magic begins. We’re experiencing that magic now.

As we look at the weather charts, we see squalls ahead. Quite a few of them. Squalls in the North-east Pacific tend to become active as the air temperature cools in the evening, but the Ocean water temperature stays warm. Then before daybreak they usually dissolve and leave hours of light air behind them. When racing we look for Squalls and gybe to stay in front of them where the wind is considerably accelerated and usually shifted right. There can be more than a 50% increase in pressure at the front end of a squall. For example: if we’re sailing in 20 knots trades, we could expect 35 knots wind speeds in the front of a squall and we could also expect to find ourselves becalmed if we got caught behind a squall. So its pretty simple: Stay in front of a squall as long as you can and escape quickly as soon as the squall starts overtaking you. Easy to say, tough execution.

The Pyewacket team has a lot of experience with squalls and we are bracing for a fierce battle here on Pegasus 77. If the competition does squall management better than we do, tomorrow morning we could find ourselves trailing. We just passed the half-way point to Honolulu. Its a long race and a 43 mile lead with over 1000 nautical miles to go can evaporate almost instantly.

We learned our lesson at the start when Pyewacket locked hammer us in a match-racing start. It backfired on them: We convincingly won the start. However, we then made the mistake of being over-confident and gave them the opportunity to pass us and build a one mile lead at the West end of Catalina. We learned our lesson. The whole team knows that and we are bracing for a fierce battle all the way to the finish line.

Juggy doing a rig check while taking a picture of himself. Note light to moderate trades