You’ve found the best place for today’s hot Transpac stories: Pegasus 77 stretched from 8 to 43 Miles in 24 hours and increased bearing by more than 45 degrees!

Our early investments in sailing South are paying off. Couple that with sailing the Pegasus at its full potential for 24 hours and the numbers tell the rest of the story:

With Honolulu bearing 250 degrees and about halfway into Transpac 2003, from our deck, Pyewacket is bearing 033 degrees @ 55 Nautical Miles. Furthermore Pegasus has made a gain for 35 Miles straight to the mark.

Our strategy has worked better than expected. The teamwork has been amazing: Everyone is pushing even harder than they usually do. It’s nice to see. This is a team that really knows how to perform in all conditions.

We are only half-way into this race and anything can happen. You can lose a four hour lead by getting caught in the back of two squalls. So, now we’re going to work even harder. Our management mantra: “Performance, Teamwork and Positive Attitude” is what makes Pegasus Racing win. It applies equally to business. Winning sport teams and successful business in my opinion are managed in a similar way.

Our friends at Alta Vita who chose a route more to the South did well on Beau Geste. Beau Geste didn’t play the shifts as we did in order to dive South and cover Alta Vita. In fact, Alta Vita was only second to us in daily run in the last 24 hours and had a better daily run than Pyewacket. Stan Honey is heading North in his Cal 40. It seems that he is trying to call an early layline to set himself up for port approach to Honolulu. That’s an interesting move given the present weather forecasts. We’ll have to see how that move plays out. We watch those battles with interest, but remain focused 100% on our match race with Pyewacket.

Now off the keyboard and onto the deck! 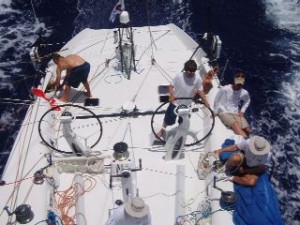 OUT OF WIND, OUT OF PATIENCE, BUT THERE’S HOPE AHEAD

That was the only Transpac to start in San Francisco and actually was 140
miles shorter than the 2,225-nautical mile course from Los Angeles in play
since 1941. For that route, the longest race was a bit over 21 1/2 days by
Irving H. Baltzer and Verne Pemberton’s Blue Jacket, a 50-foot ketch from
the Aeolian Yacht Club, in 1953.

One boat reported on the daily roll call that year: “Out of wind, out of
patience, out of beer.”

The current race isn’t that bad yet, but the foregoing is mentioned because
competitors are starting to relate to those painful passages of the past.
There was this report Thursday from the veteran Wendy Siegal’s Cal 40,
Willow Wind:

“Early morning, just at daybreak. Supposedly, there is more wind to the
south of us, but as of now we are wallowing in 2-3 knots of wind. The
newbies on board don’t believe in 20-30 knot trade winds and, quite frankly,
right now, I’m wondering if it is all a myth. This is the second light air
Transpac in a row and this year is much worse than last year. The wind
predictions have not been accurate at all. When we looked at the surface
analysis yesterday, we SHOULD have been in 20-knot trades.”

Typically, Philippe Kahn’s Pegasus 77 sailed only 249 miles but stretched
its lead over Roy E. Disney’s Pyewacket—now directly behind—from 8 to 43
miles. Pipe Dream, a Choate/Feo 37 being coaxed along by John Davis of Long
Beach in the Aloha B class, has made only 56 and 65 miles the last two days
of what looks like an 18-day trip.

Only eight of the 54 boats made 200 miles—a bad day by normal standards.
Four are now projected to reach the Diamond Head finish line as late as July
18, the day of the awards dinner. No boats are projected to finish before
Monday, July 14.

Through it all, Stan Honey, sailing his and wife Sally’s Cal 40, Illusion,
from Palo Alto, with veterans Skip Allan and Jon Andron as crew, has
demonstrated his usual Transpac navigational wizardry—heretofore
beneficial to Pyewacket—by putting this much slower boat in the right
places at the right times. With 172 miles from Wednesday to Thursday,
Illusion had a better day than most of the boats in Division 4 and below and
now lead the next Cal 40 by 68 miles.

In his daily commentary from Pegasus 77, Kahn said, “Our strategy [against
Pyewacket] has worked better than expected,” and he also took time to
question Honey’s strategy and check out the Transpac 52 duel as Bill
Turpin’s Alta Vita made a move on Karl Kwok’s Beau Geste.

“Beau Geste didn’t play the shifts as we did in order to dive south and
cover Alta Vita,” Kahn said. “Stan Honey is heading north in his Cal 40. It
seems that he is trying to call an early layline to set himself up for port
approach to Honolulu. That’s an interesting move given the present weather
forecasts.”

As for the forecasts, there may be hope beyond the horizon. Phil Mislinski,
a freelance photographer on Oahu, told the Transpac press office, “The
trades have been blowing really hard here—notes have been flying off my
refrigerator, magnets and all—and the local forecasts say it’s going to
blow through Sunday. There’s a significant chop and whitecaps on the water.”

Baldwin said, “It’s starting to smell like the tropics, [and] the forecast
from Commanders Weather indicates stronger winds with east-northeast trades
improving over the next 48 hours.”