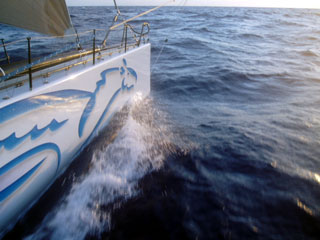 Another good report card this morning. In the last 24 hours we gained another 14 Miles. Now Pyewacket is 75 miles behind Pegasus dead astern. We sailed point to point 356 miles compared to 336 to Pyewacket.

There is a fierce battle between TP52s about a day behind us: The Kiwi big guns on Beau Geste versus the Santa Cruz smoking guns on Alta Vita. They are within a mile of each other, in-sight.

Now where is Stan this morning? Stan is doing just fine with 236 miles to go and is third on handicap. Alta Vita is surprising everyone and winning the handicap battle. But surely Stan isn’t going to give up.

Our projections show that we will be crossing the finish like around 05:00 or maybe a little earlier. Before daybreak.

It’s a bit lighter this morning and the skies are overcast. There will be squalls for the last 24 hours of Transpac 2003 and the whole team will be on the lookout.