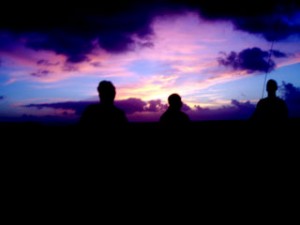 Racing to Paradise at sunrise. Yes the Sun rises East and we are headed West at 14.5 knots. Richard is steering, Morgan trimming the main and Juggy the kite. 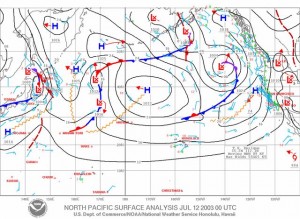 WIND AT LAST — DOOR OPENS A CRACK FOR A TRANSPAC RECORD

LOS ANGELES—Now, this is Transpac. Steady northeast trade winds of 14 to
18 knots have boosted the fleet of 54 boats in the 42nd Transpacific Yacht
Race to their top speeds so far, including near-record one-day runs Friday
into Saturday by Philippe Kahn’s Pegasus 77 and Roy E. Disney’s Pyewacket.

Both averaged 14.5 knots as Pegasus 77 sailed 349 miles and Pyewacket 347 in
the 24 hours preceding Saturday morning’s daily roll call. The record is 353
miles by Doug Baker’s Andrews 70 Magnitude when it finished a close second
to Pyewacket’s record of 7 days 11 hours 41 minutes 27 seconds in 1999.

“The course record can only be achieved at this point if the trades kicked
up to a steady 25 knots,” Kahn said. “That’s very unlikely.”

Behind them, there’s an intense contest between two Transpac 52s: Bill
Turpin’s Alta Vita, San Francisco, and Karl Kwok’s Beau Geste, Hong Kong.
Beau Geste, with Gavin Brady and other New Zealand stars on board, romped
305 miles on the day to close to within six miles of Alta Vita. Bob Lane’s
oft-modified Andrews 61 Medicine Man, Long Beach, is between them, boat for
boat.

At the same time, Alta Vita closed its corrected handicap time gap behind
Stan and Sally Honey’s Cal 40, Illusion, to less than an hour.

Kahn, also charting that contest, noted: “Illusion made a little incursion
north that they seem to have later regretted. They have now gone back south
for more breeze and sailed a few extra miles in the process.”

However, handicaps and head starts aside, the first boat to finish still may
be the Aloha class pacesetter, Lady Bleu II, Roger and Brenda Kuske’s
Dynamique 62 from San Diego, that started July 1, three days ahead of
Divisions 3 and 4 and five ahead of Divisions 1 and 2.

All boats reported Saturday, although Barking Spider, David Kory’s Catalina
38 from Point Richmond, Calif. competing in Aloha B class, has radio
problems and is checking in by e-mail to Honolulu communications officer
Walt Niemczura, who forwards the position report to the communications
vessel Alaska Eagle.

“We’ve been pulling our hair out in worry and frustration,” Kory e-mailed,
“and knowing that someone knows our problem helps a lot.”

“That woke a few people up,” she said. “The crew was from The Cone of
Silence, and the Aussies were on their way home (by plane, of course). They
stopped in at the club to thank everyone for their help and support . . .
even though they didn’t finish the race.

“The story goes back to the day they retired. I was sitting at home when the
phone rang. It was a bad connection and it took much repeating before I
heard the word ‘Transpac.’ ‘Oh,’ says I, ‘you must be looking for some
information on the race.’ ‘NO,’ he said—then more static and hissing. I
heard ‘The Cone of Silence’ and recognized the Aussie accent. ‘Oh,’ says I,
‘you are calling from Australia and wanting to know how your boat is doing.’
‘NO!’, he yells. We ARE The Cone of Silence!’

“We finally established our identities and I got the story. They tried to
contact Alaska Eagle or anyone in L.A. without success. They happened to
have the WYC phone number so they tried there. The office staff suggested
they call me.

“I never thought I would hear from them again, much less see them, but by
golly, there they were at our yacht club last night. We hugged and cheered
and shared some mai tais—almost as good a party as they would have
received had their boat arrived at Transpac Row.”

Boats’ handicap ratings may be checked at
www.transpacificyc.org/03/tp03-ratings.html