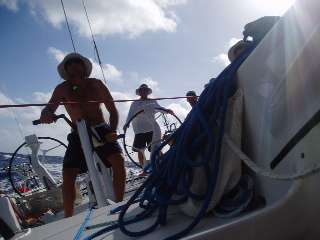 Our work-horse (No pun intended), the 4A masthead spinnaker and the little fractional staysail, Makani Hula!

Just beautiful sailing here. The team is working hard, grinding on every wave. We’re surfing the Hawaii and that is how it should be. Pegasus 77 loves it: She can smell the barn.

Goals are key to any team. So, our goal is to win this match race with Pyewacket.

We’re now setting secondary goals for the team. Goals need to be achievable or they are meaningless. For example: the course record can only be achieved at this point if the trades kicked-up to a steady 25 knots. That’s very unlikely.

Yesterday, it didn’t appear that we had a shot at beating Stan, Sally, Skip and Jon on their Cal 40 Illusion to the finish. They started 5 days ahead of us and in general had more favorable weather all along. However, yesterday Illusion made a little incursion North that they seem to have later regretted. They now have gone back South for more breeze and sailed a few extra miles in the process. Hence, there may be a little window of opportunity for a secondary goal.

“Will Pegasus be able to beat Illusion to the finish?”

That’s a fun bet for the team on Pegasus, because its a pursuit race. Perhaps what the Barn Door should be in the future to attract back the Santa Cruz 50s, 70s, the other sleds etc…: Whoever gets there first wins the prize. I love it because Skip Allan taught me how to navigate the North Pacific Ocean when he and I won the Pacific Cup in 1988, setting a record that held for 10 years with a chartered Santa Cruz 70 designed by Bill Lee. So for the fun of it, we’re going to try and catch Illusion. 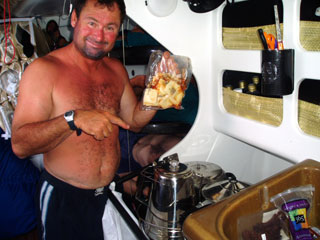 14 hard working sailors/athletes need to be fed 7 by 24 for over 7 days, no refrigeration (too heavy, Pegasus is all built in carbon fiber to be the lightest it can be), so it's zone-meals, all balanced 40/30/30, frozen in boil bags. Jeff is in charge of nutrition logistics. We have three camping burners to heat up the pressure cookers. Simple, Spartan, efficient and actually delicious.

Click for more to see press coverage from today

LOS ANGELES—There is still a lot of sailing to do, but a scenario is
taking shape for a fairy tale finish to the revival of the Cal 40 class in
the 42nd Transpacific Yacht Race to Hawaii.

Would you believe, just like the good old days, first place on overall
corrected handicap time?

Stan and Sally Honey are sailing their own Illusion, accompanied by a couple
of other Transpac legends: Skip Allan, who won overall with Holiday Too in
1967 and Jon Andron, who sailed Argonaut to the fastest Transpac ever by a
Cal 40 in 1969, the third consecutive year that the breakthrough creation of
designer Bill Lapworth and builder Jack Jensen had claimed that honor.

James Denning did it again with Montgomery Street in 1985, and now here
comes Illusion with a nine-hour lead in corrected time and 572 miles to go
in the 2,225-nautical mile race. Bill Turpin’s Transpac 52, Alta Vita, is
second and Peter Johnson’s J/160, Maitri, third in the calculations from
positions reported in Friday morning’s daily roll call.

To sweeten the prospect, Illusion, which had a five-day head start, also is
projected to finish on Monday ahead, boat for boat, of Philippe Kahn’s
Pegasus 77, the Division 1 leader, and Roy E. Disney’s Pyewacket, the boat
Stan Honey usually navigates. That is still too soon to call with
confidence, however, and at the moment it appears that several other boats
that also started July 1 will finish in front of the Cal 40s, although
they’ll owe the latter a ton of handicap time (the boats’ ratings may be
checked at www.transpacificyc.org/03/tp03-ratings.html.

Mort Andron, Jon’s father, is following the race the contest closely. He
raced Argonaut in ’67 and this week recalled meeting Jon at the Ala Wai
Yacht Harbor after the victorious finish in ’69.

“I flew over to meet them, and when I was standing there on the dock a
reporter from the Honolulu paper thought I was Jon and started asking me
questions.

“How long did it take you to get here?”

Some of the boats out there this year aren’t having many laughs right now.
Vicki, Al Schultz and entertainer Vicki Lawrence’s Andrews 70 from Long
Beach (she isn’t on it), was one of the boats that bet on a shorter, more
northerly route than the current leaders. Now it’s too late to change.

“We continue to be the definition of ‘leverage,’ ” a message from the boat
said Friday. “The wind direction has given us two options: jibe and duck
transoms or dig in. We have chosen to dig in. Based on past races, a
northern position at this stage is seldom good, but this year’s weather
pattern is not typical and we remain confident.”

Pyewacket continued to follow in Pegasus 77’s wake, perhaps looking for the
right time to break away after Kahn’s Reichel/Pugh 77 stretched its lead
from 43 to 55 miles Friday.

Lady Bleu II, an Aloha A entry that started July 1, is still nearest to
Honolulu of the 54 boats, but barely. Unlike Vicki, Roger and Brenda Kuske’s
Dynamique 62 from San Diego bit the bullet and dived deeply south across the
rhumb line for better breeze the last two days and held onto its lead by
eight miles over Ross Pearlman’s Sun Odyssey 52.2, Between the Sheets, from
Calabasas, Calif.

Bearing down on both of those boats is There and Back Again, Robert Rice’s
Tripp 40 from Long Beach. The Division 5 racer has gone alternately up and
down relative to the rhumb line the last four days, as navigator Scott
Atwood plays the unstable conditions. Their trip has been quite an
adventure, according to e-mails sent home from the boat.

One report: “Over the last few days, we’ve had two fires and Doug [Gardner]
was attacked last night by a giant killer squid that jumped on the boat.”

Question: “How big was the giant killer squid?”

Otherwise, the reports mentioned that “the only thing that has gone wrong is
water in the radio (music, not the communication radio), so now the only
music is singing to each other, which is agony. We also put the laptop on
deck and watched a movie. It was a pretty amazing night watching a movie on
a laptop on the farthest place from land on the planet.”