The weather and sea-state have completely changed. It’s now warm, overcast, winds are shifty and lighter and we’ve got the big kite and a stay sail up. We’re entering the running phase of Transpac. It’s unusually early: This is my sixth trans-Pacific crossing and it usually takes one to two days more to cross the ridge. With fully overcast skies, its pitch dark. My favorite part of offshore sailing is steering at night specially when there are no visual references. Can’t get enough of it.

Shark is back to being 100%. He’s grinding, trimming, steering, laughing at jokes and eating all the solid food that he can get his hands on. (He even ate some broccoli!). Now he is sleeping in his bunk.

We are surely crossing the ridge. The wind may be a little further right than we forecasted, so our competition may have made some gains on the shift. There is nothing that we can do about that. We’ll wait for the morning report. Now its about sailing fast through the pitch black night. 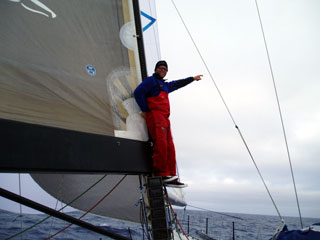 Wind-Spotting: After daybreak, sailing under cloud cover, Morgan looking over the horizon. The roll-call confirmed our strategy: Go South and sail more miles, it will pay off later, like a sound investment.

Hanging South, a fair and balanced report,
in other words, real journalism!

This morning’s roll call report reflected what we forecasted: We are now 100 miles South of our competition, we’ve gone forward 12 degrees of bearing and sailed 342 nautical miles. They sailed 328. We were significantly faster sailing lower. And that could mean more wind for us as we predicted. However, because the competition is sailing directly to the mark, they’ve gained on distance to Honolulu. They are now 27 miles closer
as birds migrate along great circle courses. But the geometry of sailing is rarely Euclidian. The straight line is almost never the fastest way to get from point A to point B on a sailboat. However the position reports will show them ahead by 27 miles.

Clearly both boats are digging in their heels. They now have lots of leverage for a big right hand shift. Pegasus is counting on significantly better winds down South. They will be looking at wind direction, we’ll be focusing on wind speed. The tropical depression Dolores could now play a bit in our favor. Thanks for being there and being nice to us Dolores.