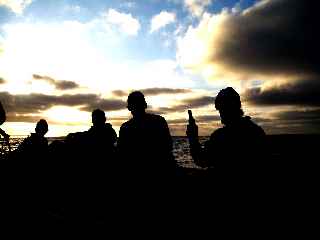 If you remember for the last three days, we had been sailing more distance than the competition investing in what we thought was a better strategic Southerly position. The difference showed up again this morning at roll call. Here are the raw statistics:

Taking a range and bearing from the Pegasus the numbers compute as following:

In terms of performance on the race course, here are the numbers for you statistic lovers:

Made Good to the Mark

This shows a 35 Nautical Mile gain to the mark for Pegasus.

What do all these numbers mean? First, a big cheer on-board the mighty Pegasus. Our investment paid off, we are now ahead on all leader boards, including for the first time on the official race schedule. In fact, our calculations show that we are 8 Nautical Miles closer than the competition as birds migrate over Oceans (Great Circle Route).

Our race so far, has mostly gone the way that we planned: We won the match-race start (a nice psychological boost for Pegasus as Robbie Haines, US Olympic Gold Medalist was steering the Pyewacket), we invested in the South and our investment is starting to pay off.

But, this is a long race and our competition is tough. We’re not even halfway to Honolulu. We need to stay focus and think about the fact that this may be a race where the lead changes a few times more. And that is great racing. It’s a yacht race! 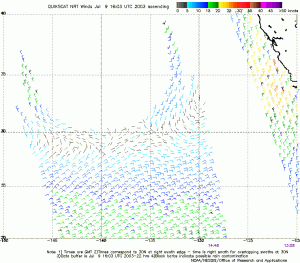 Pegasus is at about 26 North, 132 West and they are about 1/5th of a square directly North of us. 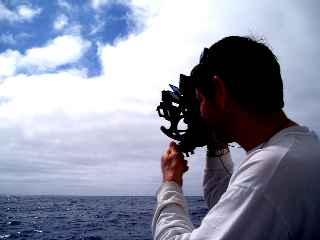 It’s just good old navigation and I like it

Navigation is mainly about two things: Knowing where you are and knowing how to get to where you want to go, fast and safely. It took a long time to develop systems that would allow ships to precisely know where they are let alone where they want to go.

The ancient Polynesians are the master navigators of all time: They were crossing the great Pacific Ocean going back and forth to and from New Zealand, Tahiti, Samoa, and Hawaii before the Europeans even knew how to safely navigate their coastal waters. Those great ancient navigators used the stars, the sun, wave patterns, bird migration to find their destinations. They developed a fantastic oral tradition that has been mostly lost, but is seeing some revival. The Western world needed to invent the chronograph to solve the longitude riddle and the sextant to have a good fix on latitude. That was all aimed at figuring out where one is, and then the compass helped with where one wanted to go.

These days, we have $50 hand held GPS devices. However, for the same reason that we still learn to add, subtract, multiply and divide although we have digital calculators, I believe that it’s important that we, as sailors or pilots, be familiar with the more traditional arts of navigation. It’s always a treat to play with the sextant on these offshore passages. Mark Rudiger carries the old school tradition with him. A very good thing. 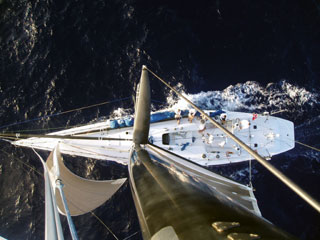 View from the top of the Mast of the Mighty Pegasus. The spinnaker is so far forward that it doesn't fit in the picture. What you see forward of the mast is the staysail that we are flying.

A FLYING HORSE ON A SLOW TRACK TO HAWAII

LOS ANGELES—“A big cheer on board the mighty Pegasus.”

That was the word from Pegasus 77 owner/skipper Philippe Kahn after
Wednesday morning’s position reports showed his Reichel/Pugh 77 had taken
the lead from Roy E. Disney’s R/P 75 Pyewacket in their Division 1 match
race of the 42nd Transpacific Yacht Race to Hawaii.

Both boats suffered in winds lighter than usual. Grant Baldwin on the
communications vessel Alaska Eagle reported, “Weather conditions have
deteriorated for the entire fleet. Trade winds are down, boat speeds are
down . . . and fish count is down.”

Pegasus 77 sailed only 265 miles in the previous 24 hours but that was 31
miles more than Pyewacket, which has endured the added pain of bearing
south away from the rhumb (direct) line in search of stronger breeze.
Pegasus 77 is now headed more directly toward the finish line 1,447 miles
away, eight miles closer than Pyewacket in the 2,225-nautical race.

“We invested in the south and our investment is starting to pay off,” Kahn
said. “We are now ahead on all leader boards. But this is a long race and
our competition is tough. We’re not even halfway to Honolulu. This may be a
race where the lead changes a few times more.”

Perhaps significant is that Stan and Sally Honey’s Cal 40, Illusion,
regained the race’s overall lead on corrected handicap time as it sailed
farther south than any other boat except Andy Sibert’s Enchanted Lady, a
Roberts 55 ketch from Seal Beach, Calif. that had the best day among the
Aloha competitors with 173 miles.

Just slightly ahead of the big boats now after starting two days earlier on
July 4, the smaller Division 3 and 4 boats continued to slog along as best
they can. Earlier, Honolulu’s Dan Doyle, sailing the 1D35 Two Guys On the
Edge with Bruce Burgess, filed surprisingly upbeat e-mail reports via
satellite.

“Now is the part of the race where Two Guys should begin to pick up the pace
on the other boats,” Doyle wrote. “The only case where that will be
difficult is if we spend the entire race in light winds, making this a
displacement/waterline race rather than a planing one. Time will tell.

“We had an interesting day today with electronic problems continuing to
plague the boat. We took on a lot of water right into the nav/electronic
station which has impacted our ability to use our radio effectively and has
generally wreaked havoc throughout the boat. I spent virtually all day with
Bruce driving and me crawling around the bilge trying to diagnose the
problems.

“The wind is blowing right down the rhumb, our fishing line is out and I am
having a nice glass of red wine. All and all, not too bad of a day. For
now, it’s on to the south!”

Australian James Neill’s Super 30, The Cone of Silence, returned to Long
Beach around midnight Tuesday after dropping out last Saturday. He was
welcomed by Marina Shipyard operator Bud Tretter with sandwiches and a case
of beer—not quite the luau welcome customary at Waikiki but a great relief
to family and friends back home who hadn’t heard a word for three days and
were in no mood to appreciate the boat’s appropriate name.

“We are back safe and sound,” Neill reported. “We were unable to get through
to Alaska Eagle on bed check or today’s [roll call] and would be grateful
if you would pass on the message. Thanks for having us in your race. We hope
to give it another try in 2005.

“For the record, the reason we retired is the boat suffered damage to its
jet drive doors due to operator error. In essence, we have a jet drive which
sucks water up through a door and then out through another. Someone
accidentally opened the cleat that holds the doors shut. This went unnoticed
and eventually the water pressure coming in through the half-opening blew
the back door off its hinges.

“It took some time to notice the damage and frankly we couldn’t work out why
we were so slow. We tried to fix it in the water but just couldn’t. It will
take two minutes to fix on the crane.

“Lastly, the radio earth [ground] was attached to the doors, which might
have been the reason we were unable to reach Alaska Eagle today.”