We’re sailing along nicely. Good news: That tropical storm has weakened and has now been downgraded to tropical depression. We’ll still watch Dolores.

It’s nice to know that we can safely stay South. The team is a bit ambivalent about this Skipper’s log because I kind of spill the beans. I guess that if we see that Pyewacket has put up a kite and dived South to meet us, we won’t be surprised. Will they chose to stay the course or try to use their height and cross ahead of us. Could they? From the wind scat pictures, the South route looks the best. Things change quickly and forecasting the weather is more of an art than a science. So the artist in chief is Rudi. And he’s a great artist in chief. The thing is, nothing is for sure and it will take a couple of days for all of this to play out. 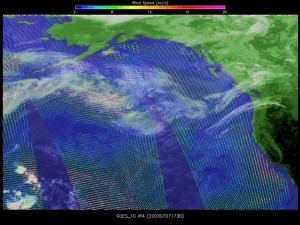 Shark clipped in, drinking lots of water, "Mom, I'm 13 now, I'm doing great... I even had a couple of Cup-o-Noodles!". Hanging tough while Doogie is trimming the head-sail, Crusty the main and I'm trying to keep the Pegasus going better than windspeed. Good sailing. 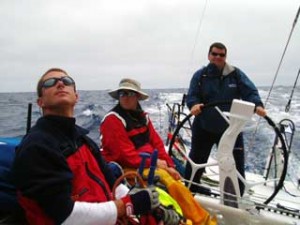 It takes a head-sail trimmer (Doogie), a Main-sail trimmer (Crusty), a driver (Philippe) and two grinders to get the performance out of the beautiful Pegasus 77.

PEGASUS 77 BETS ON THE LONG WAY TO HAWAII

The rodent connection is obvious, and the boat is named for the mystical
feline in the movie, “Bell, Book and Candle.” But the combination also
heralded what promised to be not just a contest of speed in the
2,225-nautical mile dash to Hawaii but also a game of—right!—cat and
mouse.

Monday morning’s position reports radioed to the Communications vessel
Alaska Eagle placed Pyewacket, a Reichel/Pugh 75, 11 miles closer to the
Diamond Head finish line although, as Philippe Kahn, owner/skipper of the
rival Reichel/Pugh 77, noted that his boat had sailed two more miles than
Pyewacket.

“What does this all mean?” Kahn asked in a report on his Web site. “On all
the race reports Pyewacket will be shown leading in distance to Honolulu
[but] there is more to this. We all know that both boats are going to get
lifted as the winds clock around the [Pacific] high, and in a lift it’s nice
to be the inside boat, which is what Pyewacket is doing.

“However, our weather analysis on Pegasus tells us to expect more wind along
a more southerly route [and that] it’s well worth sailing extra distance to
get south. So Pyewacket is betting on shift, Pegasus is counting on more
pressure. Given a choice, Pegasus wouldn’t trade places with Pyewacket. The
next 24 hours are going to be critical.”

As that battle of wits develops, the 25 boats that started Tuesday, July 1
were at the halfway point experiencing what communications officer Grant
Baldwin described as “stable” weather conditions with north-northeast winds
of 10-17 knots and “seas still smooth with little squall activity.”

That’s not what anyone with records on their minds wanted to see. On the
other hand, Kahn reported: “The tropical depression that is headed for our
projected path has now officially been upgraded to ‘tropical storm’ and they
gave her a beautiful name: Dolores. She apparently carries gusts over 45
knots and is picking up strength. We’ll stay away from that one.”

That could alter his strategy relative to Pyewacket.

Meantime, Maitri, Peter Johnson’s J/160 from San Diego, enjoyed the best
24-hour run in the fleet with 228 miles at an average speed of 9.5 knots to
seize the lead on projected overall handicap time from the week-long leader,
Stan and Sally Honey’s Cal 40, Illusion.

Kahn also replayed the first hours of the race when Pegasus 77 took the lead
from Pyewacket but then lost it before crossing the San Pedro Channel toward
Santa Catalina Island.

“The Pyewacket team lost the start,” Kahn said. “Robbie Haines was driving
the Pyewacket, while I was helming the Pegasus. When I handed the helm to
Morgan [Larson] a good hour into the race we became overconfident and
stretched too much to windward, letting them foot to leeward and gain lots
of gauge to the right.

“Then a massive 40-degree shift happened and we fell into a wind hole. I am
glad that we are learning our lessons early in this race.”

Pegasus 77’s daily logs may be seen at
https://www.pegasusracing.com/log.htm#latest

Daily position reports, charts, news summaries, photos will be posted at
www.transpacificyc.org until the completion of the race.