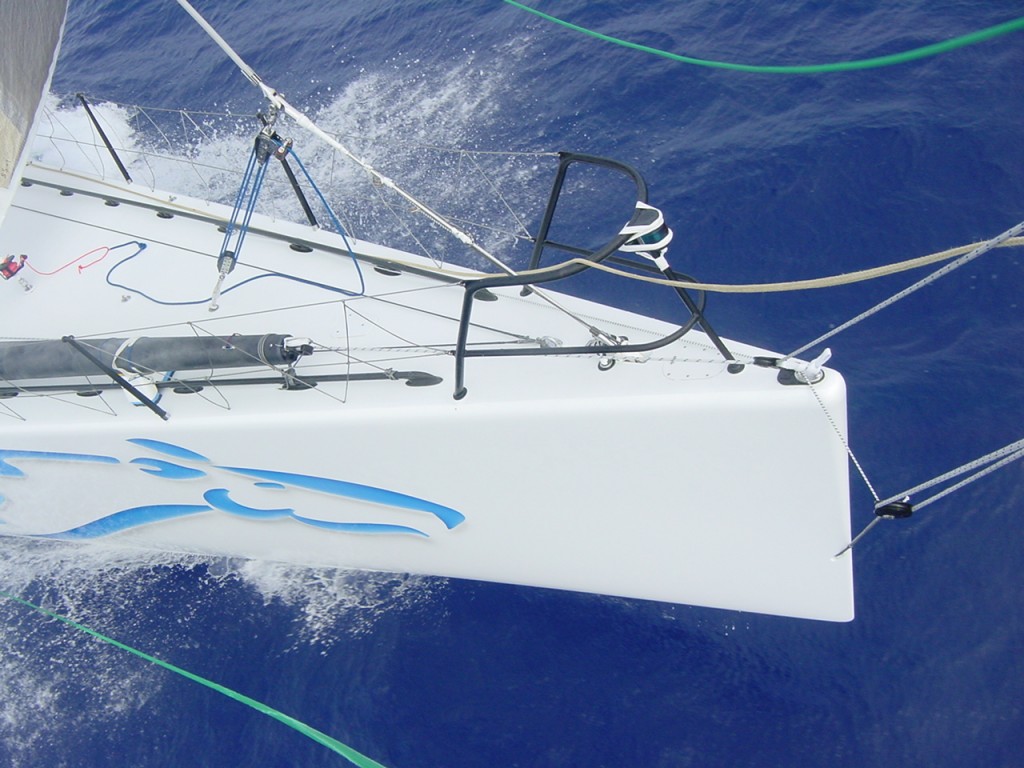 Flying over the waves, down the North Pacific Trades.

All night we jibed on every shift. This was a pitch-dark night as the moon set early. We executed each jibe like clockworks. Wind ranged from 18 to 26 knots. Jibing Pegasus 77 is a challenging process because our pole is excessively long to make it through the forestay triangle. So the first step is to roll the staysail, transfer the spinnaker tack to the bow, slide the 42 ft pole on the deck. Then pick a wave, start surfing, jibe the kite outside of the shrouds, then set the pole on the other board and transfer back and reset the staysail. We are getting fast at the whole cycle and can complete the jibe end-to-end in the dark in less than 7 minutes. By jibing all night, we were able to make little gains and more importantly avoid being pegged against the course lay lines. At 9 am, it was time to see what our competitors had been up to all day yesterday and all night. I’m still seeing waves when I take a nap as I steered Pegasus 77 for 9 hours in the last 24 hours. That makes for deep sleep amid the rumbling of grinders, winches as we surf down the huge swells. No need for earplugs.

First, we noticed that Zephyrus kept on going and spent at least 90% of their time on starboard jibe. By the time of the position report, they were on the 75-degree lay line to the finish. They are going to have to jibe soon. However, right now for us the wind direction is in the low 50s. In addition, if so, they will lose most of the leverage that they had by being North on the right hand wind shift. If they keep on going they will be over standing, which means that they would start sailing extra distance to the mark. By contrast, Pegasus 77 is much more centered on the racecourse and we can continue playing shifts all the way to Honolulu while staying south where we believe that we will continue seeing more pressure. Zephyrus 86 is still ahead of Pegasus 77 by 30 miles after 1350 miles racing on the open ocean. That is about 2 hours ahead after 4.5 days of sailing. That is it. Would we exchange positions with them? Probably because they are still 30 miles ahead. However, we could not have gotten in that position in the first place because of their waterline advantage in the heavy reaching part of the race and we also probably don’t want to be sailing in the same waters as Zephyrus 86 unless its blowing over 30 knots. So we played the cards that were were dealt in the best possible way so far and we are in many ways continuing to defy gravity. As for Mari-Cha, we gained 10 miles on them and we are definitely gaining by jibing on the shifts. They are not nimble enough to take advantage of the unusual shifty conditions that we are seeing on the great Pacific Ocean this year. Today, Pegasus 77 lived to fight another day and we are all working hard at brewing some more Pegasus Magic. It is a drag race to Honolulu!

Albatross with their huge wingspan and gliding abilities can just keep on going forever and ever. Not so the “Tropicbird”. This smaller seabird needs to continuously flap its wings or risk falling out of the sky. This is now my 5th trans-Pacific race and every time, right half way between San Francisco and Honolulu, the first Tropic bird appears out of nowhere and circles our mast for 15 minutes, quaking along, getting everyone’s attention. Then, as suddenly, the Tropicbird just disappears and remains the subject of conversations for the next several hours. This is one tough of a clever little bird with endless endurance, a quick little bird that would not let us take a picture of him. Very cool.