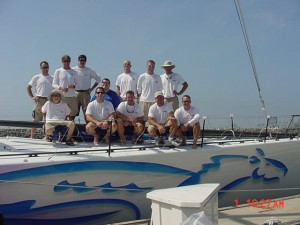 The starting line and around Catalina Island:

The prevailing wind regime offshore, away from the land, will be North Westerly winds at about 300 degrees magnetic. However around the LA Basin there is a local effect that makes wind conditions much lighter and forces the wind direction left. That effect is called the “Catalina Eddy” due to the influence of the Santa Catalina Island. July 1st was a major “Catalina Eddy” day: Winds were light around 4 knots and the pin end of the line was favored by al least 30 degrees. Because the wind was expected to shift right, our plan was to be the right hand boat and be on port at the start if we could. When the starting gun fired most of the fleet was on starboard all bunched up around the favored side of the line. Only Taxi Dancer, Chance and us got on port tack. We had a better start than Chance and Taxi Dancer and got the position that we wanted. 10 minutes into the race we were 5 boat lengths ahead of Chance while all the starboard fleet got themselves into a pinch by being caught into traffic and having a hard time laying the starting line. Its fair to say that we won the start. Not for long! Suddenly it got very light. Although Pegasus and Chance are almost sisterships, because of optimization choices that we both made, both boats perform differently in different wind conditions. Because of their larger mainsail (more power in light air) and smaller keel (with less drag), it became rapidly clear that Chance has an edge over Pegasus in very light conditions.

After 30 minutes, the narrow lead that we established at the start evaporated and Chance got ahead of us. The rest of the fleet was behind both of us. After 45 minutes it was Chance, Pegasus followed by Pyewacket, all three on port tack. On Pegasus we’re a bit frustrated: We know that we’re fast in heavy air, but we didn’t realize that Pegasus would be slower than Chance in very light air. When the breeze started filling we started to gain both height and speed on Chance. It was time to tack as the wind had just clocked right to 280 degrees. It seemed that we could almost lay the Western tip of Catalina. We tacked, both Chance and Pyewacket followed. But now with a freshening breeze Pegasus was sailing higher and faster. Two hours into the race we were back solidly in the lead and rounded Catalina first. We met our goal. But again its a long race, and anything can happen during the night.