Skipper’s notes: As Monday evening wound down, we seemed surrounded by squalls and rainbows. As the moon rose, we all got to marvel at a “moon rainbow.” A moon rainbow is formed just like a “normal rainbow,” except that the droplets in the squalls are decomposing moon beams rather than sun beams and projecting the resulting image against the sky. But because moon beams are reflections of sun beams on the surface of the moon, and because that reflection accentuates certain pale color components, the qualities of a Moon Rainbow feel very mysterious. To some spiritual. To me strange and interesting. We tried to snap ephotos, but when looking at the ephotos they appeared completely dark, adding to the strangeness and the mystery. Some in the team were starting to wonder whether we’d all now been at sea too long, wishing for more wind, flirting with mermaids and looking for Greg’s lost socks? As this spectacular evening progressed and we headed South-West the winds started picking up again. All night we sailed at an average of 8 knots, giving up distance to Hawaii for a lower latitude in order to find the trades sooner. When the sun rose we saw a few more rainbows. Today, Tuesday, is Jack Halterman’s Birthday and we happened to snap an ephoto of Jack with a rainbow in the background. I played a little piccolo for Jacks Birthday. Happy Birthday Jack. Jack is the elder and in many cases “adult supervision” on Pegasus. Most of the team is in their early twenties to early thirties. Jack’s experience is invaluable he ties with Mark at 14 for the most Trans-Pacific crossings onboard. Personally this is my third crossing. I find each completely different. By the end of the day our strategy of giving up distance to Hawaii for a lower more favorable latitude was still more theory than local reality. Would we find stronger winds soon enough? Around 2 PM the wind started clocking to the right and strengthening. By 4PM we were seeing a steady 15 knots and by 7 pm up 18 knots. We are in the trades. We’re over the ridge! We are now sailing fast almost straight to Hawaii. We are in a drag race with our competitors who stayed North and decided to sail less miles. Our theory is that they will see less pressure and that we will make up the difference in distance with boat speed. If Pegasus can sail in average 1/2 a knot faster than the competition for 3 days our strategy will have proven successful. Meanwhile we are having problems with our engine recharging our batteries. Something is wrong with one of the alternators. Most race boats run their a couple of times a day to recharge batteries that are used for computers, wind instruments and navigation. The engine is also used to run the on-board water maker that turns Ocean water into pure fresh water by pressurizing it through a special filter membrane comprised of millions of microscopic holes. Water makers and electronics are key to modern day sailboats. (Of course the engine is run with the prop in neutral.) Mark woke up Nic who was sleeping “in his shades” (our third ephoto) Our fourth ephoto shows Mark Rudiger and Nic Clarke hard at work on the engine while we are sailing downwind. Our two last ephotos show Pegasus taking flight at dusk over the large trade swells of the North Pacific. In the morning when we get position reports, we’ll start having an indication of how all the boats in the race are doing. We will sail as fast as we can all night! 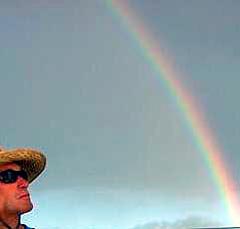 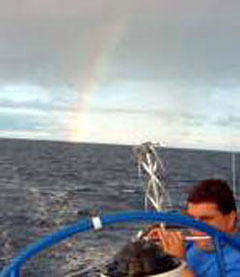 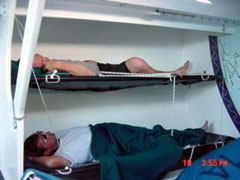 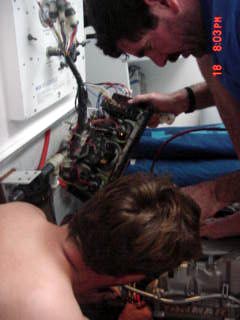 Mark and Nic working on the engine 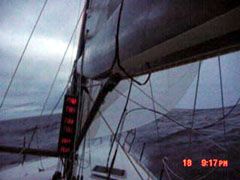 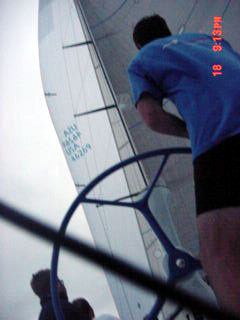 Surfing down the waves at dusk