Skipper’s notes: This was a beautiful night of sailing again. The weather has been nice all along. There is something magical about having the full moon light up the big waves of the Pacific Ocean. As the night came to an end, the wind decreased from 20 knots to less than 10 knots. We were getting closer to “the ridge.” So what is “the ridge” anyway? Think of the Pacific High as a mountain top centered 400 to 800 nautical miles from San Francisco with a ridge extending from the top South-East towards San Diego To get to Hawaii we all racers must get over the ridge. Before the ridge, winds get lighter, after the ridge the North Pacific trades carry you right to Hawaii. On the ridge everything is possible. So the strategy is to find the optimal slot to cross the ridge. Our bet was that that spot was South. We should be getting to the other side of the ridge during the night. On the other side of the ridge we’ll find the North Pacific trade winds, the same winds that carried the big clipper ships from San Francisco to China 100 years ago. Tactically Mark Rudiger, our navigator extraordinaire, played our hand well: Getting out of the Golden Gate we remained right of Taxi Dancer and Rage. Immediately after the sunset, we sneaked down to the South of Taxi Dancer and Rage in the darkness. This paid off and today we were clearly ahead. Tomorrow we will know which “slot” each one of us picked to get over the ridge. A few ephotos of life abord today: Full moon during the night, Curtis going up the mast for a spinnaker change, Curtis in the Galley, and Mark picking up a satellite image… 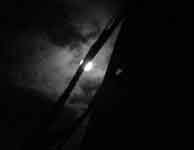 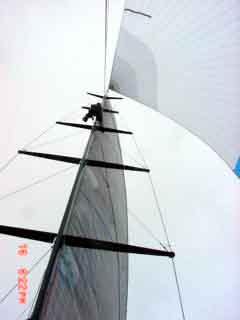 Curtis climbing up the mast

Curtis in the Galley 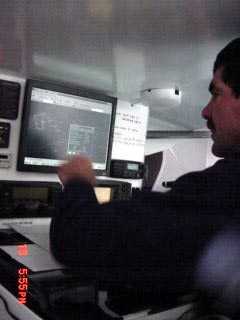 Mark working with the satellite images