Skipper’s notes: Great night of sailing: 20 to 30 kts of breeze all night. We went fast. The Pegasus team is Going South as fast as we can in order to avoid being too close to the Pacific High. Towards the center of the Pacific High Pressure zone, there is no wind. So the game is to not get too close to the Pacific High while not sailing too many extra miles. Therefore, in order to get faster to Hawaii, we are sailing more distance South so that we can sail faster later. We believe that sailing North would be a short term gain but a long term loss. In other words if we are right, tomorrow we’ll appear to have lost ground to any race boat sailing more direct course to Hawaii, but three days from now we should be considerably ahead of them. We are all playing chess with each other and we’ll know soon enough who is right. In order to go fast, Pegasus is all made out of ultra light and strong carbon fiber with giant 39 ft long spinnaker poles . We all work extra hard to keep everything light and fast. That’s because we want all that wind energy to get translated into boat speed, not furniture and gear displacement. So 3 t-shirts, one pair of shoes, a toothbrush for each of the 12 crew. That’s it. And the rule is: Anything that is left lying around gets automatically tossed over board. No exceptions. So when Marco Constant found Greg Prusia’s drenched wet socks lying around, they were headed overboard. The ephoto above shows Greg and Marco arguing a bit….. When I asked Greg: “What would you do if a mermaid suddenly showed up and brought back your drenched socks?” Greg’s answer was: “I’ll get my socks first, then I’ll catch the mermaid and cut her up and make Sushi!” That shows how hungry we all are and reminds us that the food that we eat is only as good as what we cook onboard. More on that later…Our second photo shows Morgan smiling in front our of our almost 100 ft carbon mast! Our last picture shows some crew work in 25 knots of breeze with a spinnaker and a staysail up. 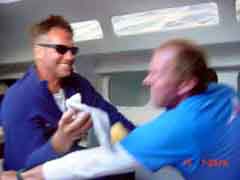 Fighting over a sock! 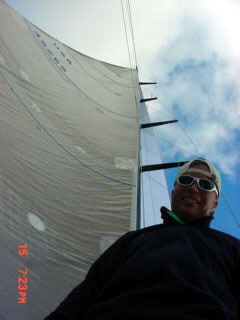 Morgan and our 100ft carbon mast 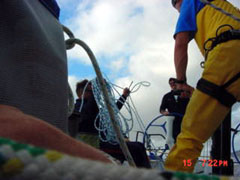 25 knots of breeze with a spinnaker and a staysail up