Skipper’s notes: Getting over the ridge is turning out to be tougher than we thought. Its like climbing a steep ridge to get to the other side. But this particular ridge is very steep. Which in sailing terms translates into low wind speeds and slow boat speed. This is compounded by the fact that an unusual low pressure system developed just North and West of us. Drifting along is not exactly what a racing team wants to do, so we had a team meeting. Everyone had an opportunity to give input and we built consensus: “Heading towards the South and sailing more miles to find the trades is the way to go.” But how many more miles? What are the trade-offs? Sailing into that low pressure system is not an option as we would find nothing but light and variable winds. This seems straightforward, but is not that simple when the direct bearing to Hawaii is 242 degrees and we are going to sometimes sail away from Hawaii in order to find the trades sooner. The GPS, as a very clever “dumb machine,” finds this counter-intuitive too: Going from and ETE (Estimated Time Enroute) of less than 5 days to one that shows more than 20 days! For a few hours we sailed South and sometimes East of South. Later we found more breeze. However, around noon, right behind a rain squall, we hit an area that was totally calm. We had been talking about our tale of mermaids, and I decided that with a boat speed of less than 2 knots this would be a good time to dive from Pegasus’ bow, swim along the port side, look for that elusive mermaid and climb back up on the stern. Looking at the charts, depth in that location was more than 12,500 feet. Away from the coasts, any form of direct urban pollution, the water is perfectly pure and of a very deep blue color. What better diving platform than Pegasus? The first ephoto shows Morgan and Gundy incredulously watching me chase the mermaid under water. Our second ephoto shows the view that our mermaid and I had of Pegasus and how clear it is that Pegasus belongs in Honolulu. (While all of this was happening, I had the privilege of making this mermaid’s acquaintance) The last ephoto shows me telling the team (with Adam laughing incredulously) that I had a discussion with the mermaid and that she told me that she had not seen Greg’s socks. (I actually told her to stay away from Greg as he’d cut her up and turn her into Sushi!) More seriously, I can’t describe with words the sensation of being able to swim in the middle of the Pacific. To me it is similar to getting first tracks snowboarding or skiing in virgin knee-deep powder. If you haven’t tried, you should. That’s because every year that you don’t try it, is one year less that you will get to do it! This was a decisive and eventful day on the North Pacific. 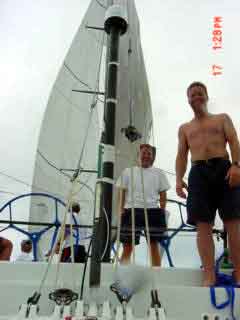 I can’t believe he did that! 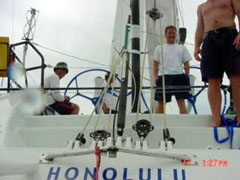 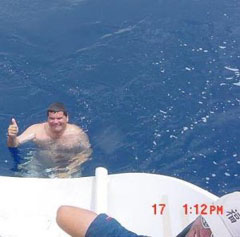 Adam acknowledging the fact that I met a with the mermaid