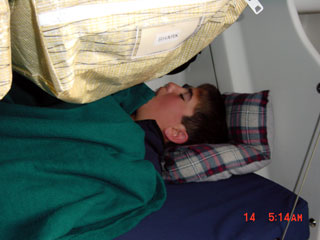 We loved Pegasus when we won Transpac 2001. Since the finish of Transpac 2001 we put Pegasus in her Transpac 2003 mode. That meant taking out 7000 pounds of lead out of the bilge, having a 2500 pound heavier bulb, moving the head stay forward 4 ft, a much longer spinnaker pole (40+ft), a new and improved rudder and myriads of other changes. Of course we also have a whole suit of brand new sails. This is our practice run for Transpac 2003!

Now in Turbo mode, we are finding Pegasus 77 to be awesome. On-board we have helmsmen from the top three Volvo teams: Illbruck, Assa Abloy and Amer Sports One. And they all are amazed at how Pegasus 77 goes. The consensus is that this is the dream boat and the dream size. A dozen good sailors can push around the clock, there are no moving parts (swinging keels), pumps and tubes (water ballast), the rigging is super-simple (masthead) and she is as light as can be. No compromises. The result: She planes in 17 knots of wind and just takes off skipping waves in 20 knots. In 16 knots of wind, with the waves we clock ourselves close to wind speed and in 23 knots we’re doing 20 knots of boat speed. Unbelievable! Yet she can make it into every major Marina around the world. You can launch Pegasus 77 from pretty much any boat yard. It appears to all of us that bigger and more complex is not better. This Transpac 75 box rule is going make some of the most exciting boats in the world.

The North Eastern Pacific has to be the best place to sail in the world with the Southern Ocean. But it’s much warmer and there is a fantastic destination: Honolulu. Pegasus 77 is just the perfect boat.

By daybreak, given the caliber of the helmsmen competing for my 27.0-knot speed record, I have mixed feelings: On one hand, I want us to go as fast as we can. On the other hand, I am proud to have my record still standing. In reality, I’d be happy to give up my little record for a few boat lengths on the race course. After all this could be as close as one could get to the downwind helmsman championship of the world: Zan Drejes, Jeff Madrigali, Richard Clarke, Freddy Loof, Mark Rudiger and others. As we went through the night watches, we were saying how Pegasus 77 in the same conditions as Illbruck established the 24 hour speed record with over 480 nautical miles could have averages 1 to 2 knots more. That does put a smile on our faces. Shark loves it because in his 12 year old mind, what is more important than speed and adrenaline?