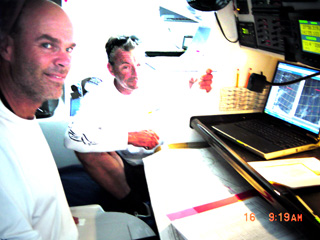 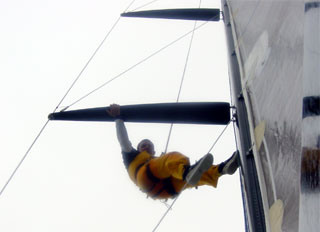 We think not. However, we still feel like we are defying gravity: We again have covered more miles and gained distance on both Mari-Cha and Zephyrus, for the third consecutive day. We have accomplished this despite an unfavorable wind shift to the right. Here are the numbers:

Ok, so what do the numbers say? First the numbers for Zephyrus are obviously deceiving because the jibed at us. Therefore, our calculations show that they probably ran 330 miles. In other words, again Pegasus sailed more miles than its much larger favored competitors did. That is about ½-knot average speed an hour more. That is quite a bit of magic, in fact to do it so consistently is like defying gravity. The boats performance polars make us come to the conclusion that we have been sailing smarter and probably in more pressure. So obviously, we do not want to be sailing in the same waters as they are as they will grind us down in a drag race. That is what the theory says. There are many discussions on board as to what we can do to make the magic continue. It is exciting.

We saw our first flying fish today. Tobiko is Shark’s favorite order at the Sushi bar, so the question was: “How can we catch a pregnant female?” And the answer came back unanimously by all of us that have been around flying fish before: “Don’t because if you touch a flying fish, that smell will stay with you for at least three days and you’ll have to sleep on deck because we won’t let you down below!”

The furthest point from land on planet earth!

At Noon, we reached mid-point: one thousand nautical miles from any land, including San Francisco and Honolulu. Take a circle of 2000 nautical miles of diameter and there is no land anywhere inside the circle. Anywhere else on planet earth and there would be some land in the circle. There was a fly down below. An annoying fly. Little did it know that it was probably the most isolated fly on the planet? Then we came to think that this fly came with us and should not make it to Honolulu because that is how new foreign species and mutations are introduced. This must happen every day with jet liners and not just flies. We got the fly.

Although our distance is half way to Hawaii, from a time perspective if the trade winds cooperate, we are more than the half way to Honolulu: We should be crossing the finish line sometime Friday. In theory, Zephyrus and Mari-Cha should get there about 18 to 24 hours before us. Nevertheless, we are working on some more Pegasus magic! 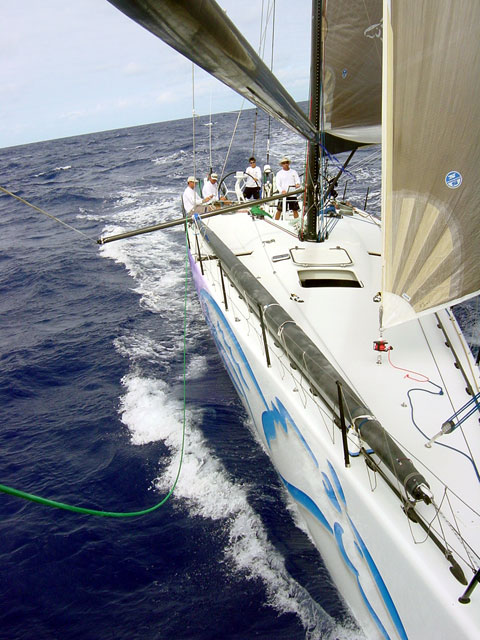 Sailing in the trades with staysail, flying the big kite. PictureMail by Mike, hanging from the pole.