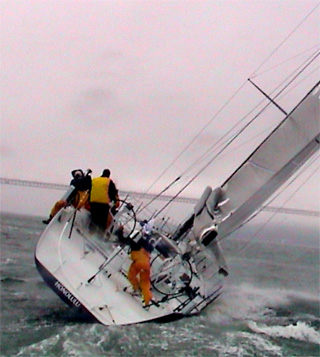 We started in 20 knots. Pegasus had the better start but with our water length disadvantage, by the time we got out of the Golden Gate, both Mari-Cha and Zephyrus were significantly ahead. When we crossed the Gate, we expected a right hand shift and we stayed right. Both Mari-Cha and Zephyrus tacked and went left. They went the wrong way. The wind shifted as we expected. After a couple of hours we crossed tacks again and Pegasus was clear ahead!

We had accomplished the impossible: we were now leading much larger racing yachts. We accomplished this through a combination of skill, teamwork and luck.

We were both lucky and the wind got light enough. It went back and forth a few times. We even got to call “Starboard” on Zephyrus and they had to bear away to avoid fouling us. All great fun as you can see from the PictureMails. First we got to pass Mari-Cha, then Zephyrus. A great morale booster for Pegasus Racing!

We know that both of these mega-yachts will pass us again. But it’s really nice to be sailing clear ahead of both of them as the sun goes down and we settle on our watch system. 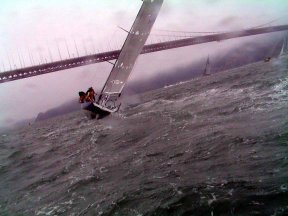 Pegasus won the start, but after 30 minutes as this PictureMail shows, Zephyrus and Mari Cha powered by us using their huge size advantage 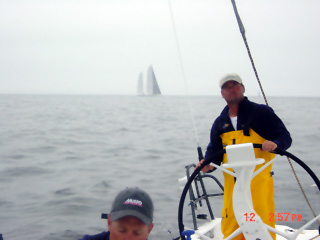 Passing Mari-Cha 2.5 hours after the start 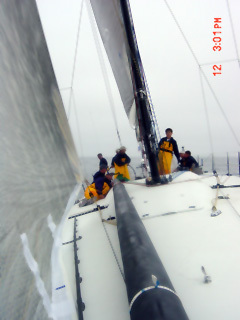 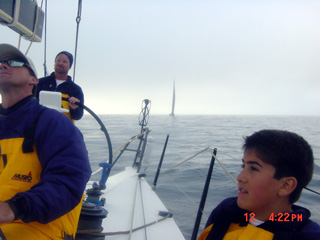 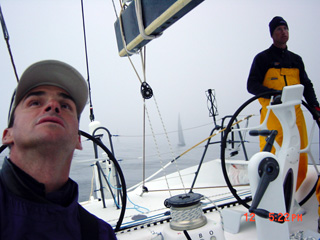 Sailing with Zephyrus behind us after 4 hours

By Midnight, the wind had evaporated. We are now drifting 10 miles south
of the Farallon islands, going nowhere fast. There is fog and we’ve lost
sight of both Zephyrus and Mari-Cha. They could be way ahead of us if
they kept on sailing in more wind. We’ll have to wait for the morning
position reports to know.

The weather charts tell us that we should see more wind after midnight.
We’re keeping our fingers crossed.

It is now 3 am, and we’ve been drifting for a few hours. We passed the Farallon Islands and it glassed out. We are just sitting in a wind hole, watching the fluorescence of the Ocean and checking out the playful seals around us. The Farallon Islands Marine Preserve has one of the highest concentrations of great white sharks in the world. So we’re looking for black fins, humming the theme for Jaws and hoping for wind.

We see lights in the distance, in the fog, glowing and a bit fuzzy reflected on the glassed out ocean surface. Some are fishing boats, but we fear that some of them could be the masthead lights of our competitors and we may not be ahead anymore. The smaller boats in particular could do very well in super-light conditions.

We’re waiting for the wind.

5:30 am: Just as suddenly as the wind disappeared, we got to the edge of the transition zone and a nice North Westerly 11 knot breeze settled in. Nice. Did our competition find the new wind before us?