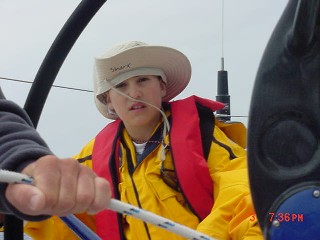 Since yesterday, Pegasus gained slightly on the our three competitors: Pyewacket, Chance and Merlin.

Pegasus continues to lead our class in the standings. However, we are all in close proximity to one another and any of the boats could end-up winning this race. It’s of course nice to be in the lead, but this is a marathon, not a sprint.

Chance is the closest boat to the North East and Pyewacket dropped several nautical miles and is now to the South East. They lost in distance but gained leverage and that is a point of concern and lively discussions here on-board Pegasus tonight: Do we cover them and let Chance go?

It feels and looks (on the satellite charts) like we are approaching the ridge axis. The ridge is the place where the winds lighten up and shift significantly to the right. That’s where we’ll get into the North Easterly trades. Where each boat crosses the ridge determines the individual approach to Hawaii and is in many ways the most important strategic decision in the race.

But now its time to think about sailing fast through the night. There is a thick cloud cover and it is drizzling. We think that it may rain. Shark can stay up on deck one hour after sunset tonight. He’s got his foul weather gear on and his harness is clipped to the jack lines. Today he kept all his food and he says that he is 98% over his initial queasiness. He’s been the referee for the helmsmen competitions. My record was short lived. It was broken many times and tonight Zan has a new one with a 20.7 knots on the face of a big waves.