First night at sea and the race starts again! 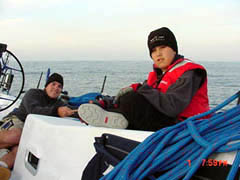 Curtis and Shark at Nightfall

As the sun came down we headed almost straight for Honolulu on a course of 220 degrees magnetic. The wind was where we expected to be we were happy to have a little lead over our competition. We started our watc

h system at 19:00 PST, basically two watches with 5 hours on and 5 hours off. Shark’s watch ended at Midnight and he was ready to get a nap. It had been a long day. The night was cool but the wind seemed steady. And then at the edge of a cloud layer we basically fell into a wind hole and the little wind that there was veered left 80 degrees. Now the distant lights of our competitors weren’t so distant anymore and if things continued, they could end-up ahead of us. 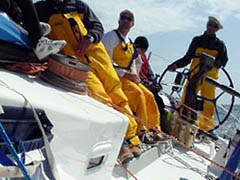 In fact the three of us within an hour got compressed in such a small area that we thought for a moment that we could have made use of fenders to avoid damage to the boats. Essentially Mother Nature just restarted the race between the three giant supersleds.

For 3 hours it was a tireless regime of changes to and from drifters, code zero reachers until we started to lift off both Chance and Pyewacket and reestablish a lead. The wind then started to come up. Big swells rocked the boat: We finally were in open ocean sailing conditions, away from the Catalina Eddy.

The morning roll call confirmed that our approach had been the right one and as I type this we are sailing a direct rhumb line course to Honolulu. Our breakfast burritos tasted delicious and Adam “The best 49er sailor in the world” Beashel would like to wish “Happy Birthday” to his Mom.
So Happy Birthday! 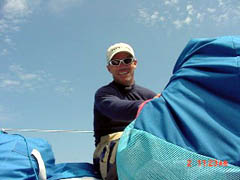