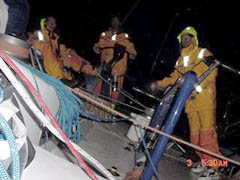 A beautiful night of sailing, but a wet, windy and cold one. Just what night #2 of Transpac is supposed to be: Full foul weather gear and breeze on! When the sun came down Shark committed to stay down below. The concern is of course that if one of us went overboard in the kind of weather that we had last night it could be a challenge to find them fast enough: Being knocked overboard by a rogue wave at night can be a life-threatening experience. For Shark, my 11 year old son, we solved the problem by keeping him inside, down below. Probably not what Shark wanted to do, but the safe thing to do. Tough regime because its easy to get sea sick down below, but all that could happen was that his dinner came back from where it came from. And it did (To Shark’s Mom: Don’t worry, he’s doing great!) Most of the night was spent with winds averaging 18 gusting to 25 with 8 to 10 feet quartering rollers. We sailed through the night on a close reach with jib top and staysail. The speed contests between helmsmen started at about midnight. Jeff and Zan were tied at 17.1 knots for a while then Morgan smashed their record as the breeze came up with an 18.7 knots. Now that was a challenge! Just before daybreak, in a 25 knot puff, I’m proud to report that I was lucky to top this with 18.8 knots on the front of a wave and take the prize for the night: Hot chocolate, which I traded for hot miso soup! Those speeds were just a taste of what is hopefully coming. The new Pegasus is fast and if the wind cooperates we’ll be seeing mid-twenties surfs riding the legendary Hawaiian waves. Last night was illuminated by a beautiful full moon, which made the breaking waves sparkle like rhinestones. To the South a very bright planet Mars was hanging in the sky like an ornament off a Christmas tree. It ‘s apparently the closest that Mars has been to our blue planet for a long time. Spectacular!

After this morning’s position report we knew that we had increased our lead a little bit through the night. We probably sailed harder and tougher than our competition. But our lead is so narrow that we really need to think that we’re behind and act as such. The changing weather patterns are key to our success and deciding what route to follow is key. Weather this year over the Northern Pacific is quite unusual and even unpredictable. .”Rudi” (Mark Rudiger) our rock star navigator has been analyzing every single piece of information that he can get ahold of. There are two factors that greatly influece our strategy: weather and what our competition is doing. And this of course leads to spirited debates among all of us. We made a decision, but I can’t quite share it with you now as the competition may be watching this website. We’ll know more after this evening’s position report.